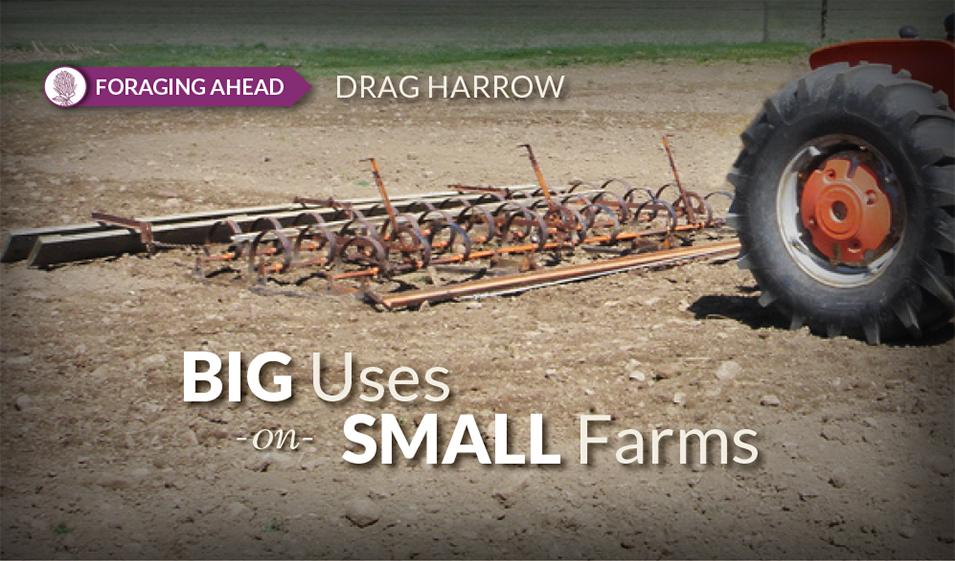 Drag harrows (often referred to as chain harrows, spike harrows or spring-toothed harrows) were once widely used in connection with the planting of many different crops. Today, they are rarely used in connection with growing row crops or horticultural crops, but still have a place on many livestock farms. On small farms, drag harrows are often pulled by ATVs rather than tractors.

A drag harrow is a simple solution for many tasks

Drag harrows are not complicated. They have no wheels, bearings, or hydraulics, and are simply pulled behind a tractor or other vehicle. Most are made of interlinked high-tensile strength rods, and have teeth on one or both sides. The construction of most models allows great flexibility, so the equipment adjusts to the undulations of the land over which it is being pulled. Depending on the model, which side is down, and which direction it is being pulled, the amount of soil disturbance that results from use of this piece of equipment can vary considerably.

A drag harrow can be used to scatter manure piles, a useful technique for improved distribution of recycled nutrients and hastened degradation of manure. This task also reduces the number of internal parasite eggs and larvae, due to exposure to the sun. However, it is debatable as to whether these benefits are great enough to justify the time and expense involved, especially given the present cost of fuel. Selected areas in which there is an unusually large amount of accumulated manure could be exceptions.

It is easier to justify the use of a drag harrow when broadcasting seed on an established perennial grass pasture. This technique works well when white clover, red clover, or annual lespedeza seed is being broadcast seeded in late winter/early spring on a closely-grazed tall fescue pasture. This also works well when establishing an annual legume and/or annual ryegrass on closely-grazed dormant bermudagrass or bahiagrass in autumn.

A drag harrow can also be used in connection with establishment of many forage crops on a prepared seedbed. It can be used in tandem with a disc harrow to help pulverize and smooth the soil, or used on land where seed has been broadcast so that it will be scattered and/or covered with a thin layer of soil. The drag harrow is not a sophisticated tool, but it is relatively inexpensive, easy to use, and can provide excellent benefits on many forage/livestock farms.

Foraging Ahead is a bi-weekly column presented by Ragan & Massey and written by Dr. Don Ball, Professor Emeritus at Auburn University. Dr. Ball is one of the authors of the popular book, "Southern Forages," available here.

Be sure to follow Ragan & Massey on Facebook for daily updates, and check back here every week for more in-depth expertise, advice and product updates.