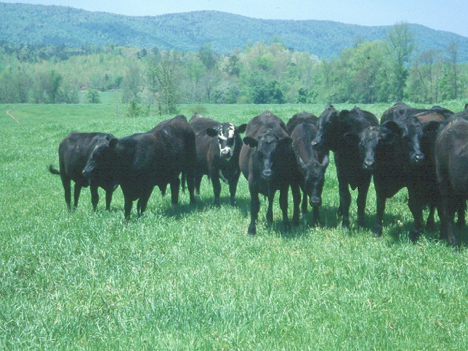 In most long-established tall fescue fields, a high percentage of plants are infected by a fungus now named Epichloe coenophiala. This fungus is an endophyte, meaning that it grows inside of fescue plants. Its presence can only be confirmed by a laboratory analysis. Toxins it produces result in poor weight gains and reproductive problems in livestock.
The fungus is exclusively seed-transmitted. It is not “contagious,” and thus does not move from plant to plant. It is not insect-transmitted or harbored in the soil. The endophyte status of an individual fescue plant depends on the status of the seed from which it arose.

Endophyte Status Categories
There are three endophyte categories, only one of which is associated with toxin production. The first is “toxic-endophyte” fescue. Most long-established fields are the variety ‘Kentucky 31,’ and fall into this category. ‘Endophyte-free” (or “fungus free”) fescue does not contain an endophyte. A third category is “novel endophyte” fescue, which contains an endophyte that does not produce toxins, but that favors stress tolerance in fescue plants.

Establishment Of A Non-Toxic Field
Conversion from a toxic-endophyte fescue field to a non-toxic fescue (endophyte-free or novel endophyte) field requires killing the existing toxin-producing plants This usually involves the use of herbicides and/or growing a row crop or perhaps annual forage crops for at least one growing season. This must be done right; many producers have thought they killed all the existing plants and later learned they did not. Live plant material under the soil surface can result in reestablishment weeks after it appeared the stand had been eliminated.
Also, a field to be converted must not contain viable toxic-endophyte seed that might result in volunteer plants. Therefore, a field where non-toxic fescue is to be planted in autumn should not be allowed to make seed during the year the new stand is reestablished. This requires prevention of seed production by toxic-endophyte plants during the year in which non-toxic seed is planted.

Maintenance Of Non-Toxic Status
Toxic-endophyte pastures keep that status over time. Novel endophyte pastures likewise dependably maintain novel endophyte status. Also, pastures containing virtually nothing but endophyte-free plants tend to remain endophyte free. However, pastures that are initially mostly endophyte-free but that actually contain some level of toxic-endophyte plants may increase in infection level.
The reason for this is that endophyte-free fescue is less stress tolerant than fescue that contains an endophyte. This makes little difference in the northern portion of the fescue belt, but because of increasing heat, maintaining a stand of endophyte-free fescue becomes more challenging farther south. Overgrazing (often caused by drought) is another stress that also often comes into play. Some endophyte-free varieties are more stress tolerant than others.
Livestock can be a source of toxic-endophyte seed. When animals consume such seed, about 12% can germinate after passing through the animals’ bodies. About 12% of these seed (about 1.4% of the toxic seed ingested) will contain viable endophyte and can result in infected plants. Animals that have grazed a toxic endophyte pasture that contains seed heads should not be allowed to graze a non-toxic pasture for at least 3 days.
Non-infected fescue plants do not become infected. However, because plants containing an endophyte are more stress tolerant than non-infected plants, the death rate of non-infected plants is somewhat higher, especially under conditions of severe stress. Also, endophyte-infected plants tend to produce more seed than non-infected plants, so infection level tends to increase over time.

Conclusion
Non-toxic tall fescue constitutes a great opportunity in areas where tall fescue can be grown, but to establish and maintain it, a few management practices should be employed.
1. All existing toxic-endophyte plants in a field to be re-established must be killed. Seed production of toxic-endophyte plants must be prevented during the year of re-establishment.
2. Seed purchased for re-establishment must be totally non-toxic.
3. Lime and fertilizer should be applied according to soil test recommendations.
4. To get off to a good start, seed need to be planted at the proper time, rate, and depth.
5. No other species should initially be planted with non-toxic fescue. Clover can be interseeded later.
6. Non-toxic fescue should be grazed no closer than 3 to 4 inches.
________________
Foraging Ahead is a column presented by Ragan & Massey and written by Dr. Don Ball, Professor Emeritus at Auburn University. Dr. Ball is one of the authors of the popular book “Southern Forages,” which can be found via a computer search that uses the words, “Southern Forages, The Fertilizer Institute”