White Clover is a Winner 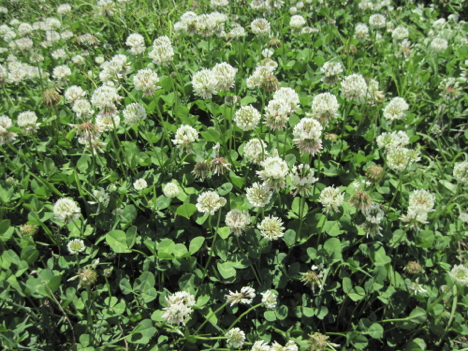 Economic considerations have greatly increased interest in forage legumes in recent years.  The most widely planted forage legume in the United States and in the southern region is white clover.  It is our most widely adapted pasture legume, a true perennial, and quite tolerant of grazing.  It is best adapted to heavy soils or to lot-lying wet-natured areas, but can be grown on a wide range of soil types as long as the soil pH is at least 5.5, the soil is relatively fertile, and a reasonable amount of soil moisture is present during the growing season.

White clover is normally grown as a companion species to a perennial grass, particularly tall fescue, orchardgrass, or dallisgrass.  It is sometimes grown with bermudagrass or bahiagrass, but these grasses are quite competitive and usually quickly crowd out white clover unless they are kept grazed closely and little or no nitrogen is applied to be warm season grass.

White clover seed is extremely small, so the seeding rate recommendation is only three to five pounds per acre.  Great care and precision must be used during planting if the seed are to be evenly distributed.  As with virtually any legume, the seed should be inoculated prior to planting, but most white clover seed sold commercially is pre-inoculated.

In most of the South, white clover is usually planted in autumn, but late winter plantings can also be successful in locations north of Birmingham, Alabama or similar latitudes. When planted into an existing sod in the fall, it is important to be certain there is not a high cricket population present, otherwise the seedling clover plants may be destroyed unless an insecticide is applied.

Whether planted in spring or fall, success is unlikely if the clover is planted into a thick, vigorous perennial grass sod.  In such a situation, the grass should be severely suppressed by either strip-spraying a herbicide or by tillage.  If there is only a thin stand of grass present it may be possible to obtain a white clover stand by closely grazing the grass, and broadcasting clover seed, especially if a drag harrow or similar tool is used to scratch the soil.  Seed can also be drilled, but great care should be taken to place the seed no more than one-quarter inch deep. A prepared seedbed should be firmed well with a cultipacker before planting to prevent the seed from settling too deeply into the soil.

White clover is a forage crop that has been around for a long time and it has many desirable characteristics:  It is a legume and does not require nitrogen fertilization, it is a perennial, it produces forage of very high quality, it is a good yielder, it is widely adapted, and it is quite tolerant of grazing.  White clover is a “winner”, and needs to be widely used on livestock farms.

Foraging Ahead is a column presented by Ragan & Massey and written by Dr. Don Ball, Professor Emeritus at Auburn University. Dr. Ball is one of the authors of the popular book “Southern Forages,” which can be found via a computer search that uses the words, “Southern Forages, The Fertilizer Institute”